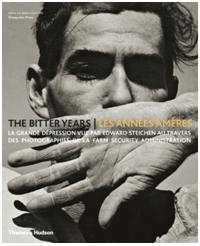 The Farm Security Administration Photographs Through The Eyes Of Edward Steichen

‘The Bitter Years’ was a seminal exhibition curated by Edward Steichen in 1962 at the Museum of Modern Art, New York. The show featured 208 images by photographers who worked under the aegis of the US Farm Security Administration (FSA) in 1935-41 as part of Franklin Roosevelt’s New Deal.

‘The Bitter Years’ was the last exhibition curated by Steichen, who was not only a distinguished photographer in his own right, but also a celebrated director of the photography department at MoMA, in which role he had won international acclaim in 1955 for ‘The Family of Man’ exhibition.

This book is published in association with the Centre national de l’audiovisuel and the Ministry of Culture in Luxembourg. It accompanies a permanent display at the Château d’Eau in Dudelange of the original exhibition, given by Steichen, who was born in Luxembourg. No proper catalogue was produced of the exhibition in 1962 so this book provides a unique opportunity to see all the photographs in a structure and sequence that reflect those devised by Steichen for the original show.

‘The Bitter Years’ celebrates some of the most iconic photographs of the 20th century and provides a whole new insight into Steichen’s impact on the history of documentary photography.